Please visit me on


Thank you.
Posted by Bingo

1. She wants to do everything on her own. Everything means every single thing except, ofcourse, eating.

2. The other day she was wearing her sandals and  when I went to help, "No mummy, you should not help" she said.

3. She was sitting at the potty seat and I was reading the newspaper outside the toilet. I went in after 2-3 minutes and she told, "mummy, not done. You go and read paper". !!!

5. We bought a new water bottle for her and she declared that was her friend S's bottle and refused to drink from that bottle. Apparently, S has the similar bottle and he brings it to school.

6. She wants to wipe her hands only in the towel after washing. She refuses to use my kurta.

8. She comments all our actions - "Mummy is using laptop", "Daddy is coughing", "mummy is preparing mammam for Bingo" etc. until we nod for her.

9. On the other day, she has to carry a vegetable to her school and tell one or two sentences about the vegetable. I was training her with carrot.

BM - This is carrot. It has vitamin A
Bingo - Mummy, carrot is so chill (

I just took it out from fridge)
BM - Ok but, you repeat what I say. This is carrot. It has vitamin A
Bingo - Jumping with carrot
BM - Bingo, say - this is carrot, it has....
Bingo - It makes you strong (showing her muscles like popeye)
BM - shut up and goes away thinking she can manage without my help

Scene - 1
Bingo's Mom - "Bingo, remove your shoes and keep it inside the rack."

Bingo - Screaming "No mummy" and runs inside house.

BM - "Please remove your shoes laddu" with a smiley face.

Bingo - runs all around the house.

Bingo's Dad - "Bingo, remove your shoes and keep it inside the rack."
Bingo - *Removes the shoe and socks
*Closing the shoe rack door after keeping the shoes inside properly.
*Smiles at daddy.

This incident happened about an year back. We were to travel from Chennai to Hyderabad. We boarded the train before 15 minutes of its departure. I asked BD to get some magazines while I set our luggage. I called him over phone and asked him to get banana for Bingo.

There was some chaos as some passenger could not find their seat. The porter was standing behind them carrying their luggage and was standing next my seat. He almost sat on the seat when some other person crossing the place and then they went away.

Then my brother who came to send off us brought some magazines so, I thought of informing BD. I could not find my phone. I started panicking  as I lost 2 mobiles within a year before having this. It was hiding between the seat and window. I could not see it as it was covered by window curtain. All this is happened within a minute.

The point is, in less than 60 seconds of losing and finding the mobile, I strongly suspected the porter for stealing it. Later, I felt ashamed and I started thinking seriously about this. Why I suspected him? Why not the co-passenger? I was wondering about my mentality.

Then I narrated this to BD and told him that, I don't want to raise Bingo with these kind of thoughts an mentality i.e. blaming poor people. As the train started moving, my thoughts went deeper on this issue. What's your opinion on this? How do we teach our kids on this? Having said all this, I have much to tell about the domestic helpers. I may share in a different post.
Posted by Bingo

Getting the 'Sena' Ready

Few days back I was watching Mahabharat on youtube while Bingo was playing with her toys in the other room. She wanted water and she came to me. At that time some war scene came where they showed lots of horse and elephant. She exclaimed saying,

B: Mummy, look horse and elephant
BM: Yes, and how does a horse sound?
B: neigh.. neigh
BM: How does an elephant sound?
B: pawoooo..
BM: Very Good. Drink water and go.

After some 5 minutes I went inside to put her to sleep and I saw this: 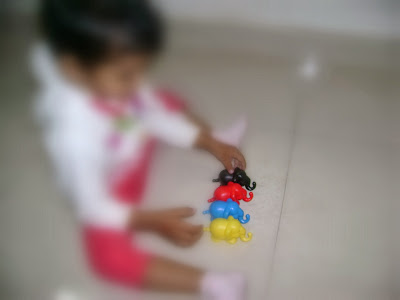